Which dataset do you want to use?

Which properties do you want to feed in?

Click anywhere to edit.
Weight/Bias is 0.2.
This is the output from one neuron. Hover to see it larger.
The outputs are mixed with varying weights, shown by the thickness of the lines.

Um, What Is This?

It's a fork of TensorFlow Playground with additional features.

Deep learning research is famously empirical. But traditionally, getting good intuitions requires a cluster of servers with which to try out a wide variety of hyperparameters. Visualization allows you to quickly get a sense for how a neural net behaves & speed up feedback loops in research.

What did you add to the original Playground?

First, I changed the loss function for classification from the squared loss (used by the original Playground developers) to log loss. This change isn't visible in the interface. But it's essential for building intuition, since log loss is what's used for classification in the real world.

The remaining changes are a mixture of standard deep learning techniques not present in the original and research ideas of my own that I wanted to explore through visualization.

But I was interested in varying the regularization rate during training, to see if it's possible to discover a simpler model this way. And indeed, this appears to be the case. 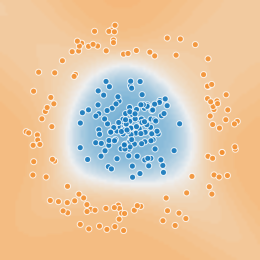 Another example: These settings usually do an OK job of learning a spiral. Increasing the regularization to 0.1 makes it impossible for them to learn anything... unless you increase it to 0.1 after the spiral has already been learned, in which case you get a nice faded spiral shape.

"Post-training regularization" is a simple idea, but I think it could be really important.

Animation speed: Controls the speed of the animation. arrow_upward

Dropout: Implements inverted dropout for hidden units. Goodfellow et al suggest using an inclusion probability of 50%, and increasing the size of the model to account for dropped units.

To help you avoid a seizure, the animation speed will automatically slow down when dropout is active. If you want to crank the speed back up, I suggest first resizing the window so the network is no longer visible. arrow_upward

Layerwise gradient normalization: A major issue that makes training deep neural networks hard is the vanishing gradient problem. As a case study, observe what happens when we take the default Playground settings and add a bunch more layers. Typically, there's a long period of slow learning before the net finally discovers a circle shape. Sometimes it never learns a circle at all.

My idea for layerwise gradient normalization is motivated by the following metaphor for vanishing gradients. Imagine the neurons in the network as employees in a corporation. During forward prop, each neuron takes a linear combination of the work done by its "subordinates" (neurons on the previous layer), applies a nonlinearity, and delivers the result to its "superiors" (neurons on the next layer). During backprop, a neuron gets feedback in the form of partial derivatives from its "superiors", adjusts its behavior, and passes its own feedback on to "subordinates".

This gets us to the vanishing gradient issue. Because the gradient is small for lower-level neurons, they learn slowly. We can't increase the learning rate for the neural net as a whole... that would cause the neurons at the top to learn faster, and the feedback they deliver their subordinates would no longer be consistent.

The solution is to nudge the gradient towards being the same size at each layer. Layerwise gradient normalization accomplishes this by splitting the gradient into a separate vector for each layer and scaling each vector to unit length. This allows us to guarantee that each layer of the net is changing at the same rate.

In practice, information about how the gradient magnitude differs between layers is still useful—a gradient with a smaller magnitude indicates less confidence about the correct direction to adjust. So the dropdown lets you to interpolate between ordinary gradient descent (p = 0) and forcing a unit vector at each layer (p = 1). This is accomplished by dividing each layer's gradient by its norm taken to the power p before updating weights.

To see this in action, observe the example from before with p = 0.8. Despite the depth of the network, a circle is quickly learned. Some of the weights are a bit high because we haven't adjusted the learning rate to account for the rescaled gradient. To address this, we can reduce the learning rate a bit, or make use of post-training regularization.

Unlike other fixes for vanishing gradients, such as skip connections or ReLU activations, layerwise gradient normalization doesn't restrict the kind of model we learn. In fact, the corporation metaphor hints at a method for training a much broader range of deep models. Machine learning researcher Michael I. Jordan writes:

In other engineering areas, the idea of using pipelines, flow diagrams and layered architectures to build complex systems is quite well entrenched... I hope and expect to see more people developing architectures that use other kinds of modules and pipelines, not restricting themselves to layers of "neurons".

If Jordan is right, and the future brings a broader variety of layered architectures, that could be a very good thing for learning "the correct model" and resisting adversarial examples. arrow_upward

One drawback common to most hyperparameter optimization algorithms with more sophistication than random search is that they require for a training experiment to run to completion before they are able to extract any information from the experiment. This is much less eﬃcient, in the sense of how much information can be gleaned early in an experiment, than manual search by a human practitioner, since one can usually tell early on if some set of hyperparameters is completely pathological.

Some recent work has addressed this by computing "hypergradients", i.e. taking the derivative with respect to hyperparameters. This allows a hyperparameter such as the learning rate to be updated dynamically during optimization.

To prevent missteps, the increase learning rate action is only available if the average loss decrease for the current learning rate is favorable. (You might also want to err on the side of choosing a small learning rate to start with.) arrow_upward

Thanks to the folks behind the original TensorFlow Playground site. The moons dataset was copied from scikit-learn. The heart dataset is based on this blog post by Pavel Panchekha.